Why are there so few Christians among scientists? (part 2)

In my previous post of this series, I showed the following distribution of people who believe in God across increasing levels of scientific achievement: 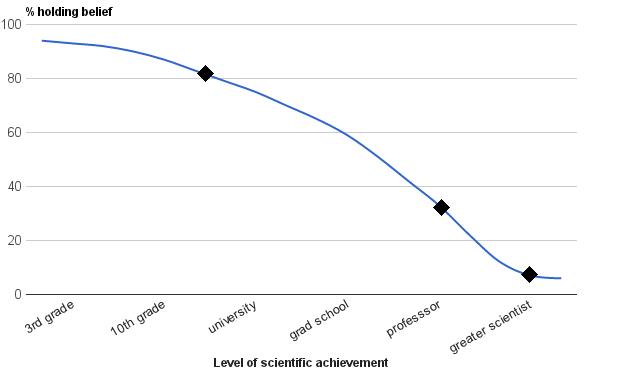 My task in this post is to explain the shape of this graph. I have already ruled out a fundamental incompatibility between Christianity and science as the reason. The above distribution looks qualitatively different from the distribution of scientifically incorrect beliefs, and we also have the very words of the National Academy of Sciences (NAS) and Galileo Galilei stating that Christianity and science are compatible. Well then, if it's not incompatibility, why are there so few Christians among scientists?

There are multiple sociological reasons. I will present the summary graph below, then explain the each reason individually.

(Consider opening this graph in a separate window and keeping it there to look at - I will be referring to it often for the remainder of this post. Also please note that this graph is not meant to be quantitative. It is meant to only show the qualitative deflections that each social effect is likely to have on the distribution.) First, if we assume that there are no relationships between Christianity and the level of scientific achievement whatsoever, we expect the distribution to be flat. Proportionally, there would be just as many Christians who are NAS members as there are Christians who only have a 3rd grade education. This will be our starting distribution, shown as the dark blue line labeled "no social effect" in the graph above.

The first social effect that changes this flat distribution is the Christian outreach to the poor, the outcast, and the marginalized - a group which includes the intellectually challenged, the uneducated, the superstitious, and the unscientifically minded, none of who are likely to achieve great scientific goals. This causes the distribution for Christians to rise on the left side of the graph, which has been shown as the red line labeled "outreach to poor" in the graph above.

At this point, I'm going to momentarily abandon whatever objectivity I'm supposed to have here, and simply say that I'm glad about this. I would not abandon this social effect even to have 100% of the Nobel prizes won by Christians. I don't care that this reinforces the "Christians are dumb" stereotype. I don't care that this means I have to spend time tutoring inner city kids in teaching them multiplication tables instead of learning more quantum field theory. Christians have ministries serving convicted felons, sex workers, homeless vagrants, and the mentally ill - people that we actively recruit who "drag us down" or "can't carry their weight" in this competition for scientific advancement. This puts us behind scientific organizations or atheists groups, who do not have such ministries (that I know of) and therefore get further ahead of us as a population in the sciences. It's totally worth it. Give us your uneducated, your intellectually challenged, and your mentally ill. We're followers of Christ. We have no standards. We let just anyone in.

There have been some people whom I've been in church with who are severely lacking in intellectual ability. I consider it an honor that they chose to come to my church, while they would have been excluded from my science classes. While I constantly fail in my attempt to see them as Christ sees them and not judge them by their intellectual abilities, they do me the honor of showing me how God works in ways that I would never have realized by myself.

Back to social effects: the next effect which causes a change in the distribution graph is the tendency for the intellectual elite to separate themselves from the population at large. This has nothing to do with Christianity - it's simply an effect of the fact that it takes some confidence and some knowledge to not believe what everyone else is believing, and that exceptional individuals like to distinguish themselves from the general population. I've heard it described as intellectual hipsterism. Since the United States is largely Christian, this effect turns the intellectual elite non-Christian. In a non-Christian country, this effect works in the reverse direction and increase the number of Christians in the upper echelons of society. See, for example, Japan, which is only roughly 1% Christian, but has had 8 Christian prime ministers. South Korean Christians also have a disproportionate effect on their society, despite Christianity being a minority religion in that country. Exceptional individuals will frequently break away from the herd, whatever the "herd" may be. The orange line labeled "break from herd" on the graph shows how the distribution changes when this effect is considered on top of the previous effect.

We next consider that religion and science do require different modes of thinking, and therefore religious people are less likely to pursue science. This causes a deviation downwards in our distribution as people go to college and choose their majors, and the effect increases as they need to pursue an increasingly narrower education to advance in the scientific world. This, of course, does not mean that the two fields are incompatible, only that they require different modes of thought. Consider physics and fashion. Not many people are deeply engaged in both fields. Does that mean physics is unfashionable (some would say yes), or that fashion defies the laws of physics (some would say yes again)? Is it not rather that few people can easily work in these two vastly different modes of thinking? The green line labeled "different modes" on the graph above shows how the distribution changes when this effect is considered on top of the previous effects.

Next, consider that being a good Christian is hard, and pursuing science is also hard. Few have the resources to do both. Being a Christian is not simply a label you give yourself; it will take, on a very tangible level, some number of hours per week, and some number of dollars per month. I will not venture to pin down an exact number of hours, but suffice it to say that it is non-negligible, and increases significantly if one wants to be intellectually engaged in Christianity, which Christians are commanded to do. Furthermore, the kind of Christians who would pursue higher scientific goals are the same ones those who are inclined to spend significant amounts of time exploring their faith intellectually. All this means that being a Christian of a high intellectual caliber requires a great deal of time.

This time competes with the time one has to put in to advance in science. Consider the difficulties of advancing beyond a bachelor's degree in the sciences. It's common for graduate students to put in 80-plus hour workweeks at some point in their PhD program. The travails of being a grad student are well known. And things just ramp up from there; if you want tenure at a research university, you have to be prepared to give up many things, perhaps including things like having a healthy family life, or even having a family at all. The people who reach the highest level are ones who are obsessively focused on their tasks and who have made tremendous sacrifices to get there. To reach that level, it's simply easier if you have a world view which is also easy - one that doesn't demand anything of you and doesn't take a lot of thought. Whereas if you're a Christian, it becomes increasingly difficult to meet all the demands on your time and energy.

I suspect that the ratio of scientists engaged in any extraneous time-consuming activity is very low, as it is for Christianity. It's a simple fact arising from the fact that there just isn't enough time. So only 7% of the NAS members believe in God - but how does that prove that Christianity is incompatible with science? How many NAS members are are fashion designers or published poets or professional athletes or little league coaches?

This also means that the Christians who do succeed at the highest levels of academia are worthy of double honor - they are exceptional individuals deserving our admiration and imitation.

This twofold demand upon one's time and energy is a strong effect that drags the distribution of Christians downward, starting from when one reaches graduate school, and increasing as we go further along the scientific achievement axis. The purple line labeled "additional effort" on the graph shows how the distribution changes when this effect is considered on top of everything else so far.

The last effect is merely simple social pressure. Humans want to be like those around themselves and those whom they look up to. They're less likely to join a group that they feel doesn't represent them or might be hostile to them. It's the same effect that plagues any kind of minority (women, people of color) in high levels of academia. It's unfortunate, but it exists. For our purposes, This causes the left end of the distribution to rise, since the majority of the people there are Christians. It also causes the right end of the distribution to dip, since there are fewer Christians among that group, and fewer still as the people there look up to those who have advanced further in the sciences. The light blue line labeled "social pressure" on the graph shows how the distribution changes when this effect is considered on top of everything else, and that brings us to our final distribution.

I believe that the combined effect of all these societal pressures explains the distribution of Christians in different levels of scientific achievement. The qualitative effect of these pressures does give the correct shape, and that gives me confidence in my conclusion - but if anyone has any quantitative data on these things, I would very much appreciate them.

That is the end of my explanation for the shape of the graph. So, where do we go from here? This whole situation seems rather unfortunate, from both the perspective of a Christian and a scientist. Some of these effects we can do something about, and some seem beyond remedy. There are many things to address. But for now, I will merely mention that there are things that we, the Christian Church, can do now to improve the situation. Some of the things are addressed in this Relevant Magazine article. We also need to reform our bad theology regarding how we approach nature and science - I swept this under the "different modes" effect in the analysis above, but some of our theology concerning natural revelation and science drives Christians away from science, and we are at fault if we don't fix it. All this, and much more that I'd like to to talk about, will have to wait for another post at some future time.

You may next want to read:
How physics fits within Christianity (part 2)
The limits of science as evidence for Christianity
Another post, from the table of contents

2 comments on “Why are there so few Christians among scientists? (part 2)”