Finding pi in a square grid: or, why you can have square brownies for pi day

This is a picture I took on the side of a road: 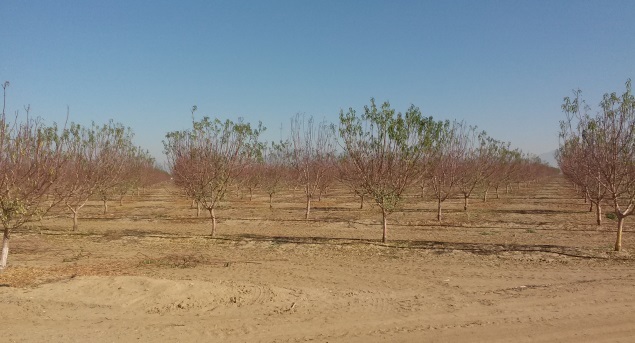 The trees are planted in a regular pattern, in basically square grids. This creates the fascinating picture you see when you then look at the trees from the sides. You can see far off into the distance along some angles, but are blocked from seeing too far in other directions. The effect can be mesmerizing, especially when you drive past these fields on the highway.

While I was on one such drive, I began to wonder: what exactly is the pattern I'm looking at here? In particular: what is the probability that you can see one tree from another tree?

Let's nail down the specifics of the question: If you and a friend are in an infinite square grid of trees, and each of you choose to stand at a random tree, what is the probability that you two will be able to see each other? For the purposes of this question, we'll say that you can see each other if there are no trees between the two trees you've chosen. That is, one must be able to draw a straight, line-of-sight segment from one point on the square grid, to the other point on the grid, without any intervening points getting in the way.

That's right - you can get pi out of a problem that only has squares in it. There is no need to involve circles.

Let's begin the solution by saying that the tree you're standing at is the origin, represented by the coordinate (0,0). The x and y axis can then be arbitrarily assigned along the edges of the squares that make up the grid. All this can be done with no loss in generality.

The tree that your friend is standing on can then be assigned the coordinates (x,y). Now, can you see the point (x,y) from the origin? Well, is there a straight line connecting the two with no intervening points?

So now, the question has become "what is the probability that two randomly chosen integers are coprime"? Well, let's start by remembering the definition of "coprime" - that there can't be any natural number other than 1 that are factors of both integers.

For the numbers larger than p*q, the pattern just repeats itself.

Therefore the probability of having a particular prime number as a factor can be treated as independent probabilities, and since this is true for any two pair of prime numbers, the values derived from unconditioned probabilities can all be multiplied together.

Then the extended expression becomes:

This infinite product is a well-known expression, and it evaluates to 6/π2. That evaluation was first solved by Leonhard Euler, who was one of the greatest mathematician to have ever lived.

So, pi is far more profound than simply being the ratio of a circle's circumference to its radius. It comes up in all kinds of unexpected places, like in problems relating square grids or prime numbers.

I wish you a happy pi day! And feel free to eat square-shaped things today, like some square brownies, or a rectangular pizza you bring to a pi day potluck. You're mathematically justified!

You may next want to read:
The two envelopes problem and its solution
How to think about the future (Part 1)
Another post, from the table of contents