This was the view from my room. The beach at La Serena is quite pretty.

You see that cross-shaped structure in the distance, which juts out into the skyline? That's the Cruz del Tercer Milenio, in the city of Coquimbo. 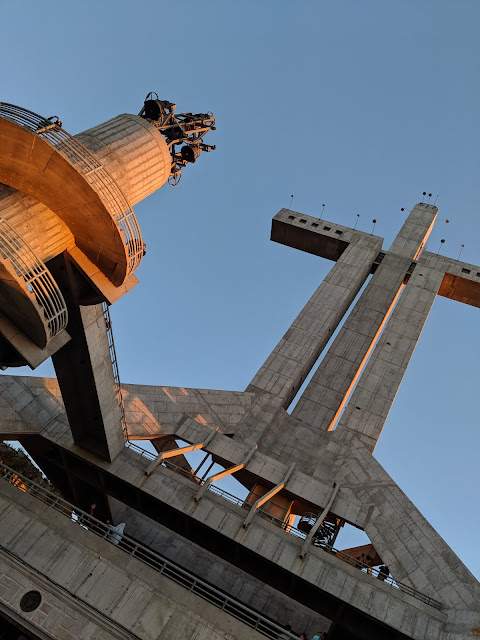 And this is the the view from there: 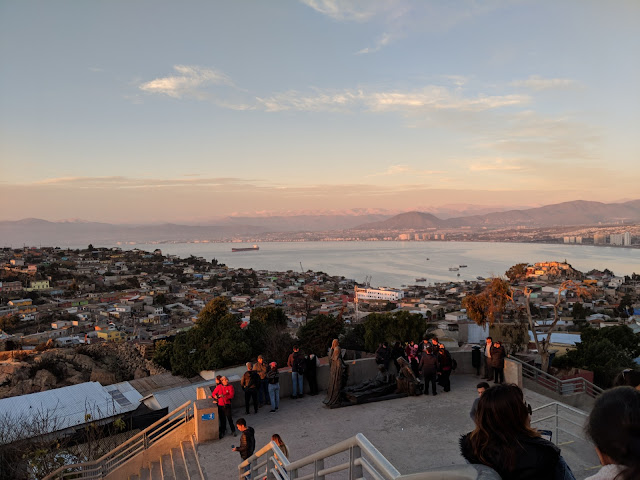 The whole area reminds me of the San Francisco Bay Area, with the hilly-lands-across-the-water aesthetic. For better or worse, I missed the Sunday mass at Cruz del Tercer Milenio, and ended up attending an evening service at a church back in La Serena - Iglesia Cristiana La Serena. 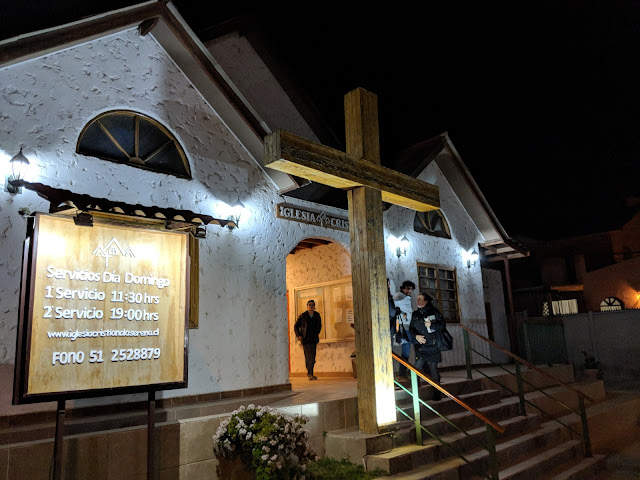 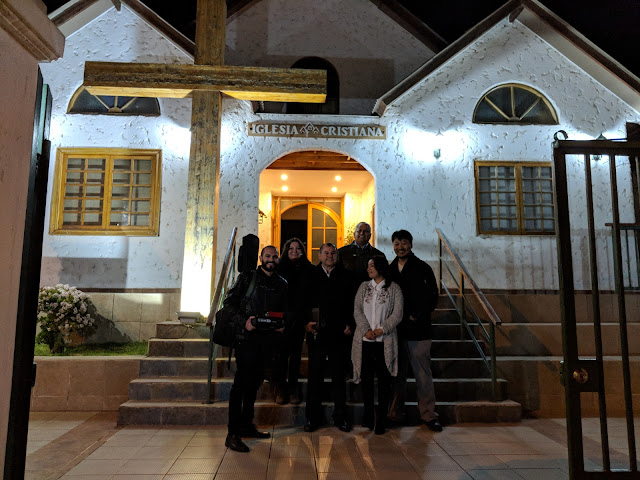 I hardly understood any of the sermon, but I did know some of the songs, and I liked the other songs that I heard. Overall, I was surprised by how familiar it all felt - it's the same surprise that I've almost come to expect now, whenever I run into any part of the body of Christ anywhere, across space and time.

The following is a picture of the moonrise over La Serena, the day before the eclipse: 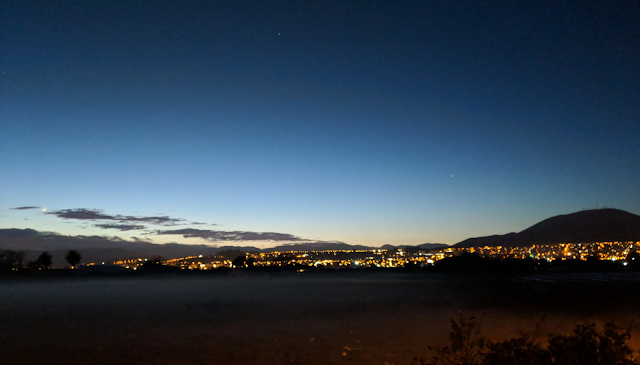 I find the crescent moon on the day before the eclipse to be a highly underrated phenomenon. It is delicate and beautiful, appearing as the thinnest of possible crescents, as if out of a magical fantasy world.

Sometimes, I think I can even see the "crescent" encircling the entire disk of the moon, with very faint lights outlining the whole sphere. Or maybe it's just a difference in the brightness of the sky inside and outside the disk, or just an optical illusion. 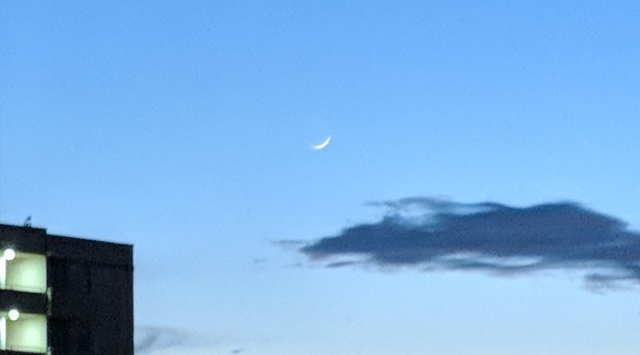 But in the end, I think I need better equipments - I'll put it on the to-do list for next time.

The moonrise in the morning on the day before the eclipse went unnoticed by nearly everyone. But by the evening that day, the city was quite busy: 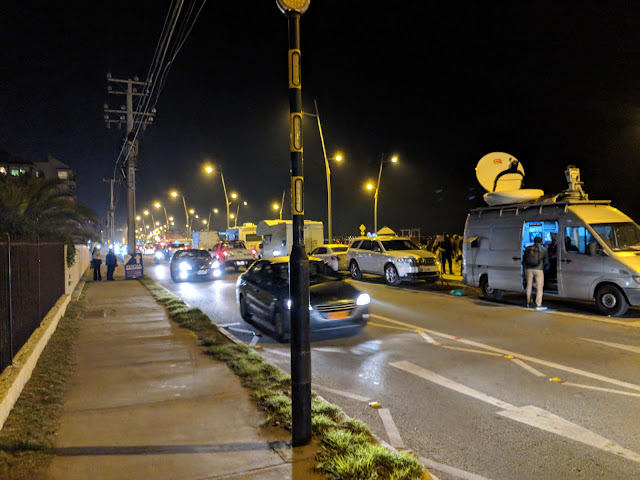 In that picture you can see several RVs (which reminds me of my last eclipse trip) and a news van (the crew were reporting nearby), with roads full of cars and sidewalks full of people. The locals told me that things were much busier than normal.

The day of the eclipse: the weather was perfect, and the people were out in great numbers to see the eclipse at the beach. Remember that this is during winter in Chile: on another day, this shot of the beach would have maybe a dozen people in it. 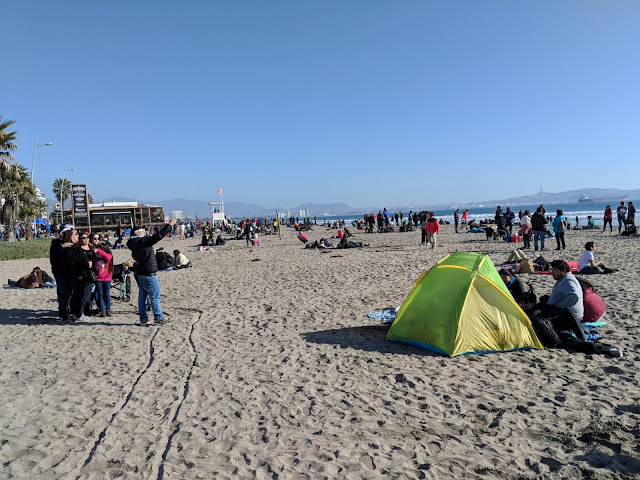 Totality: the picture does not do it justice, but it does give some sense of how dark it got, when you compare it to the picture above. 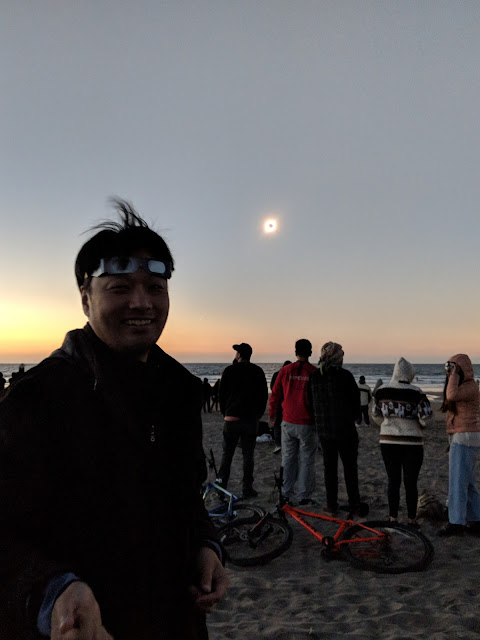 I saw the eclipse with Cristian and his family, whom I had met in the Sunday service at Iglesia Cristiana La Serena. He gave me ride back to my lodging after the service that night, suggested that we see the eclipse together, and offered to show me around town. This is exactly how the Church should act, and I'm so very grateful to Cristian for embodying that ideal.

Here we are after the eclipse. 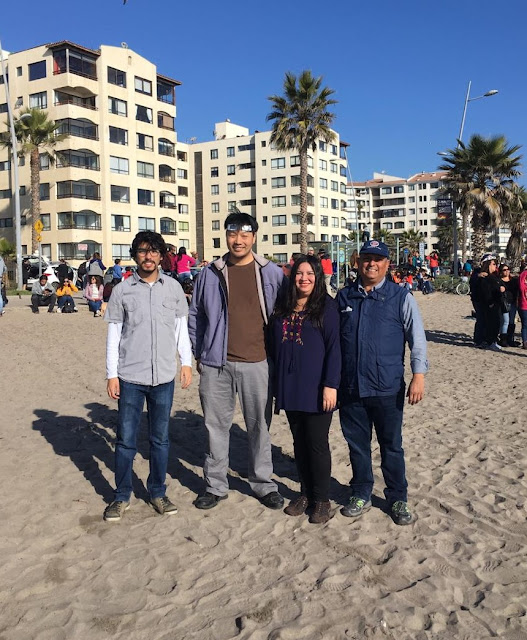 As for the eclipse itself - my opinion on it hasn't changed since the last one. Total solar eclipses are, by far, the greatest natural spectacle I've seen. I do not expect them to be surpassed for the rest of my life. Right after totality, Cristian and I turned to one other and professed that God is beautiful. And the impact of the eclipse was such that, in our finite minds, the phenomenon was enough to fulfill that infinite statement.

A couple days later, Cristian and his family showed me around La Serena. Here are some of the locales we visited:

Fuerte Lambert, at the tip of the Coquimbo penninsula: 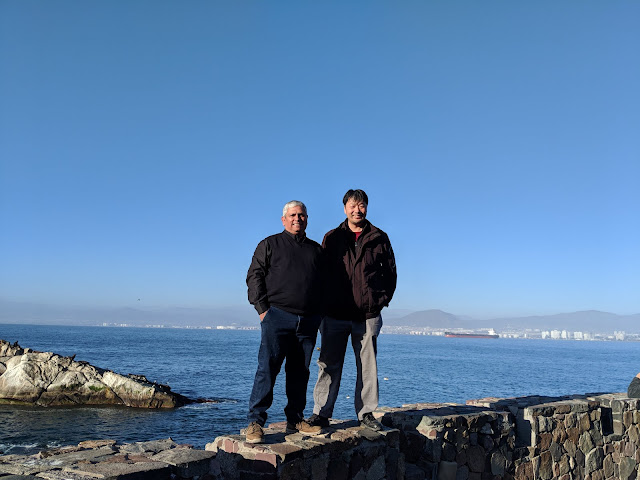 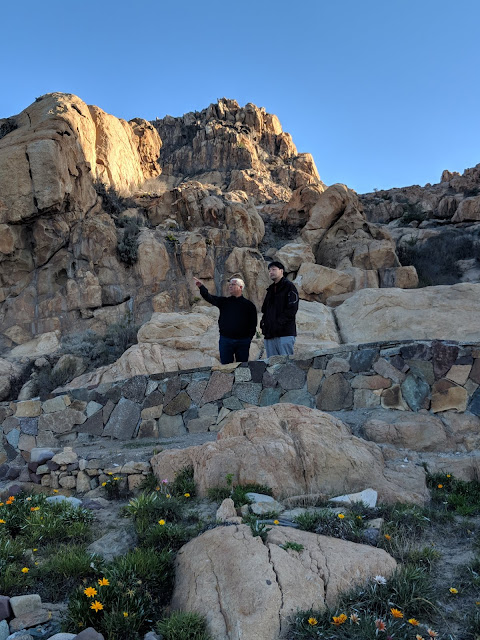 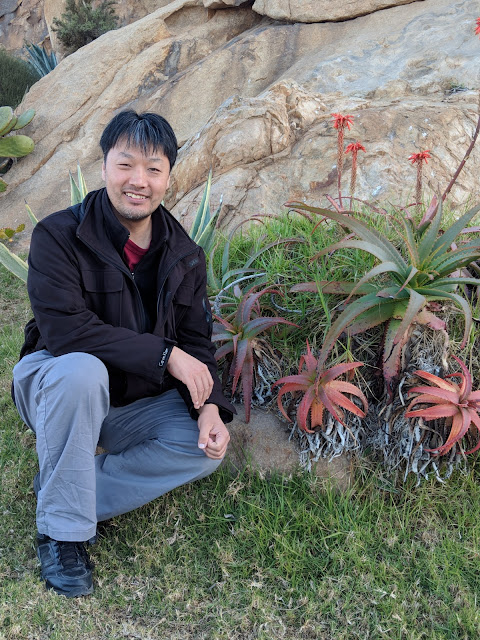 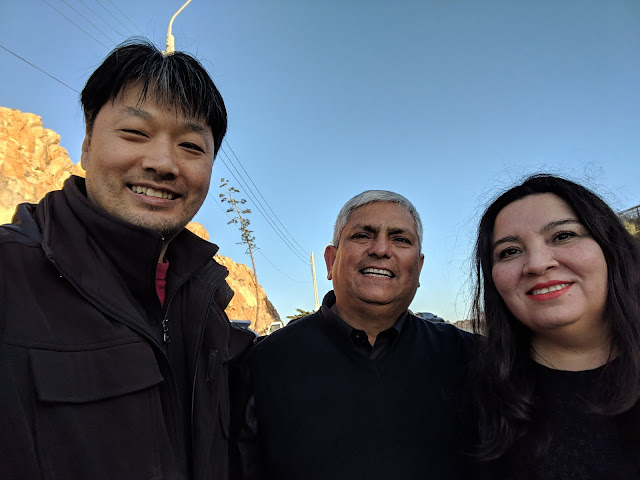 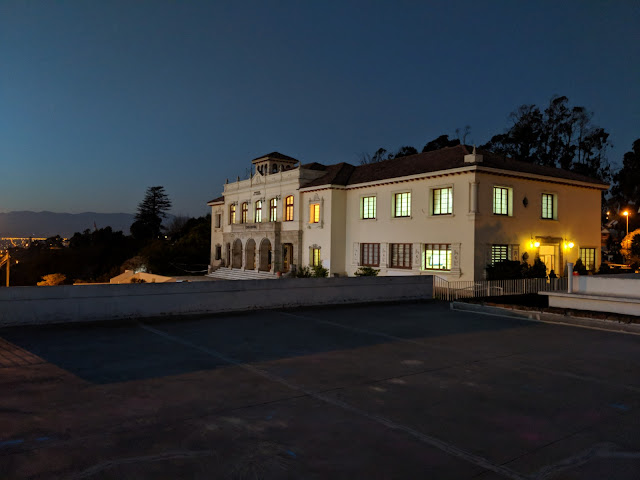 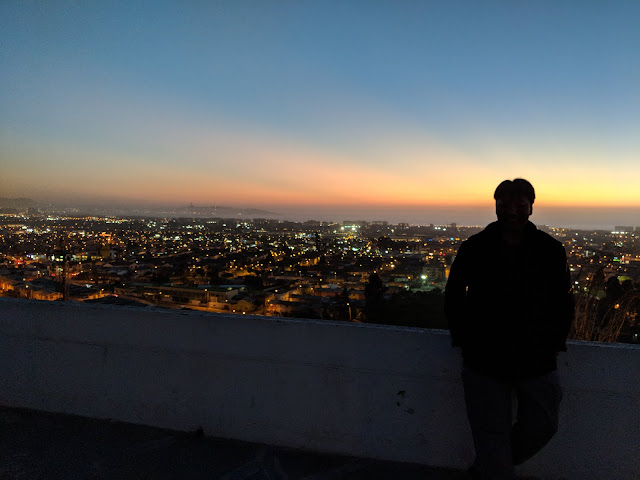 We then had an excellent dinner and parted ways - but not before one last picture. 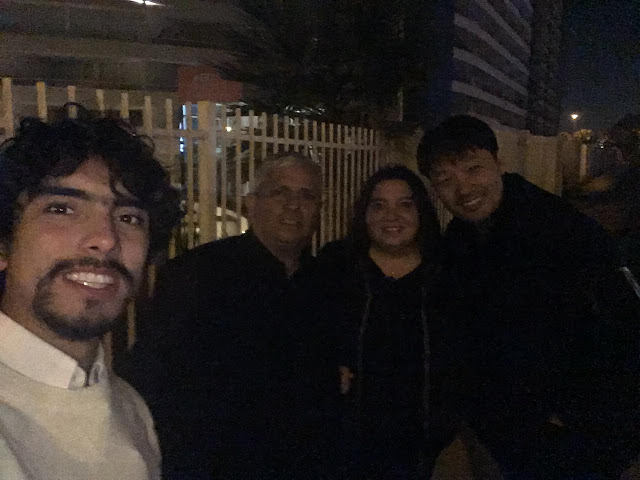 Afterwards on that night, I managed to knock off one of the things from my bucket list: seeing Alpha Centauri and the Southern Cross with my own eyes: 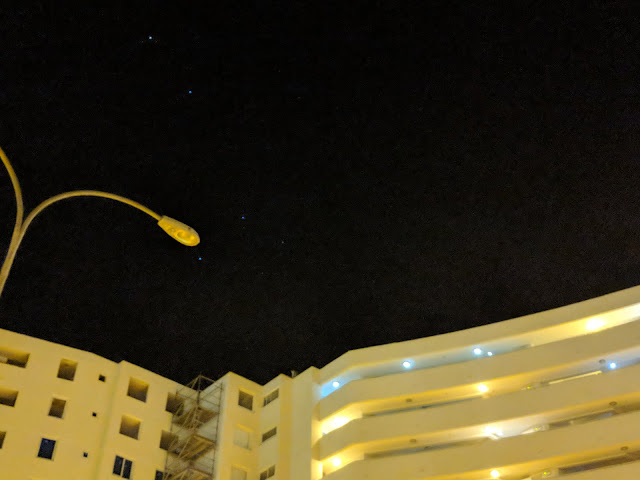 On the last leg of my trip, I explored Santiago for just a few hours. Earlier, I had met Sussy on the flight down to Santiago at the beginning of my trip, and she offered to show me around - I gladly accepted. The following are some of the pictures from Santiago. 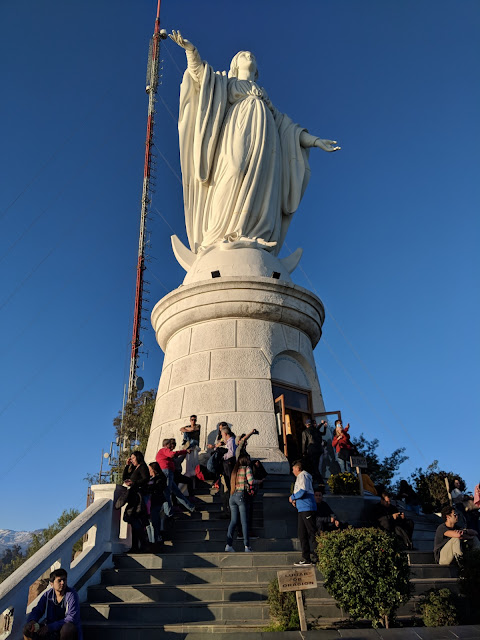 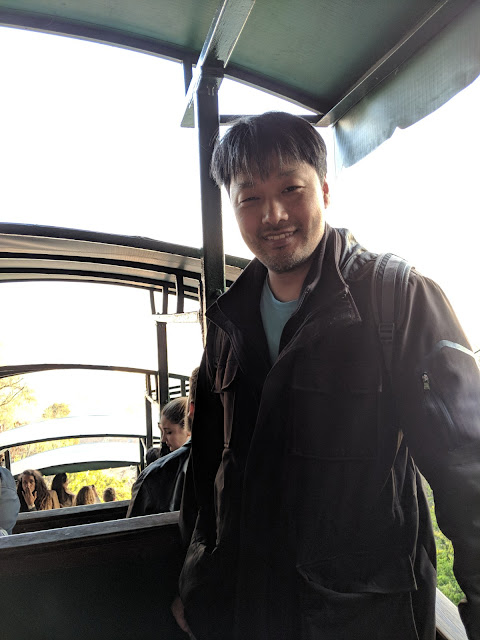 One thing I noticed in Chile was the large number of strays dogs. The locals told me that they're protected by law - they cannot be harmed, and are provided with some degree of health care. I wondered whether they caused any problems, but as far as I could tell this concern was largely unfounded. The dogs seem to be well-behaved and intelligent. They had friendly interactions with humans, and seemed to know their way around the city, including safely navigating streets full of automobiles. This one, for example, waited for the funicular to come up to the station at the top of the San Cristóbal Hill, and crossed over to the other side when it did. 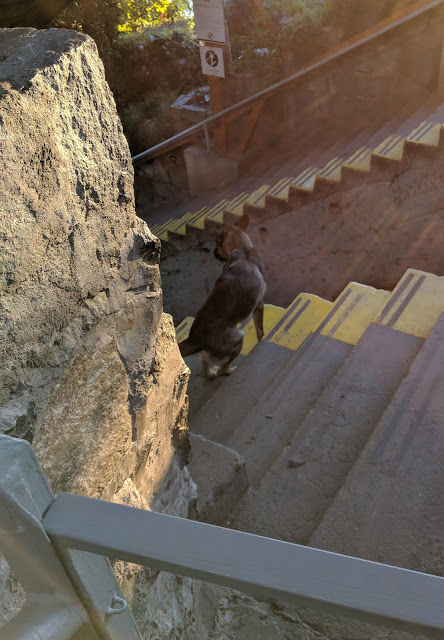 The Plaza de Armas in Santiago: 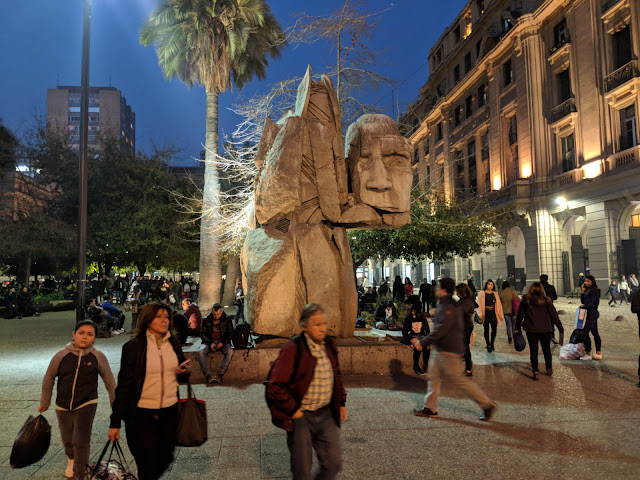 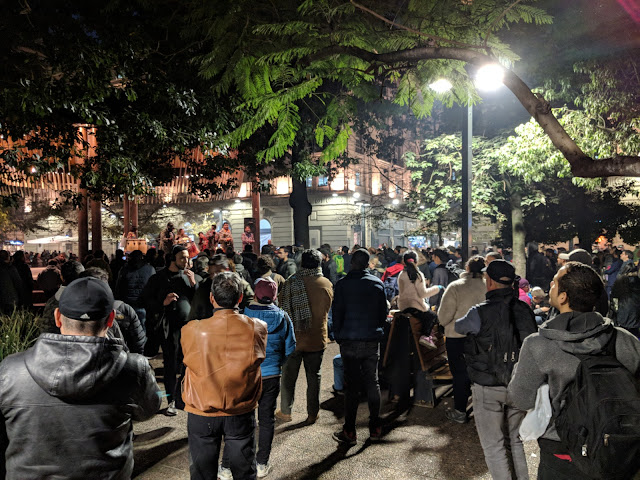 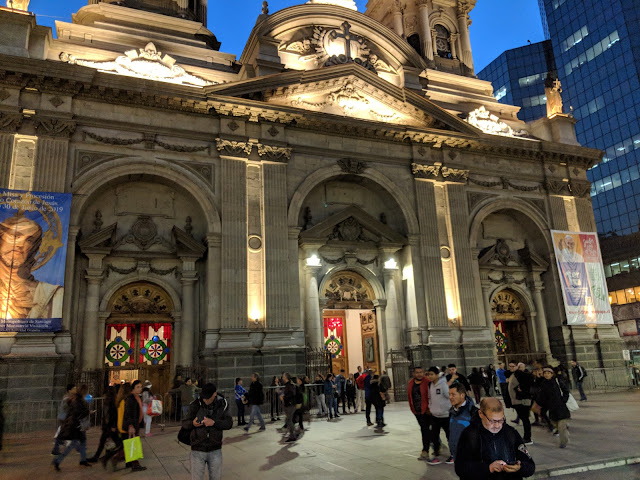 The interior of the church pictured above: 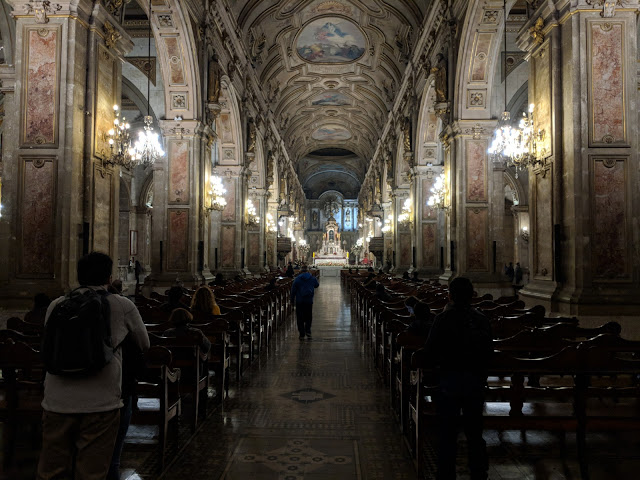 And lastly, me and my guide Sussy, to whom I'm very grateful: 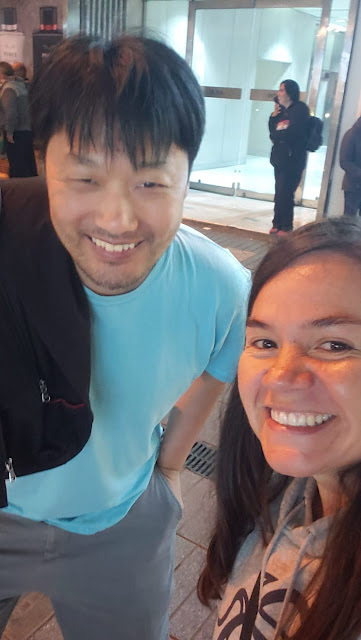 And that's the trip! That last picture was taken just a little before I headed off to the airport to fly back to the US. The eclipse itself was, of course, awesome - but beyond that, I was struck by open warmth of the people of Chile. I was exceedingly fortunate to have befriended some of them, and to have them be my guides for this trip. Again, they have my lasting gratitude, and I hope to see them again sometime - perhaps for the eclipse in 2020?

You may next want to read:
Bayesian evaluation for the likelihood of Christ's resurrection
A record of the total solar eclipse
Another post, from the table of contents